Our lesson on the 2nd day started by practice greetings and question and answers using “?Ã -rai”. After that, we learned about the basic things we should know for the rest of the term.

The teacher explained how to produce each sound. The explanation is similar to the sites that I link above. I’ll write a few notes from my class:

There are 4 groups of initial sounds, based on how you pronounce it and associated with words we learned before:

For the complete vowels, please go to this site (you even can hear the sample sound).
Special note :

I didn’t have special notes on this part, just visit the link above 🙂

This is the hardest part of learning Thai (at least for me). There are only 5 tones and if you say the word correctly but without the correct tone, then Thai people won’t understand. I don’t know how to write the explanation without giving the sound example. I’ll just write the five tone in Thai language :

Before the class ended, the teacher gave us another homework to practice the 5 tones at home. 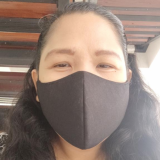 a housewife who recently learns to knit and crochet, lives in Chiang Mai since 2007, so must learn Thai Language, and had some part time job to do documentation with LaTeX and welcoming for a new family member at the end of 2010

This work is licensed under a Creative Commons Attribution-Share Alike 3.0 Unported License.